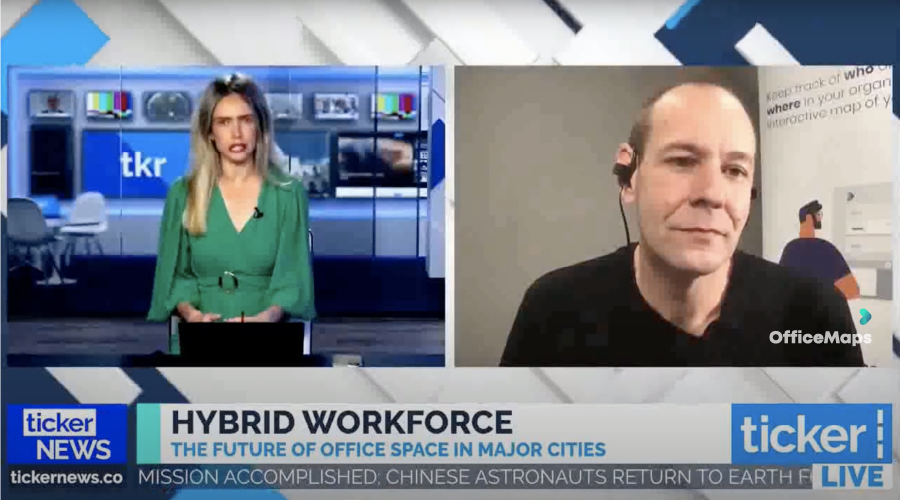 Holly: Well we all know what a hybrid workforce is by now, but what do the types of hybrid workplace models actually look like and how will the future of office work look like? Robert Wilkinson from OfficeMaps is here for more on this. Robert, great to have your company, thanks for joining us.

Robert: Thanks Holly, great to be here.

Holly: Robert, what do offices look like when major cities begin to return to normal?

Robert: Interesting question and it seems to be quite a spectrum at the moment. Actually, we're seeing a lot of different scenarios playing out - everything from you know completely virtual offices, where you don't have a physical office anymore and you might rent some space in one of those places where you can just turn up on a day and spend a day in the office, or all the way back up to that 100% back in the office - what most companies are doing though is going back to that hoteling and hot desking type environment though where they can start shrinking down the size of the real estate that they've got and only have people come in when they need or want to. That seems to be that the primary method that most companies are doing these days when they come back to the office and you can see this happening a lot in the us where they're just about to come back completely into the office they're allowed to come back and that's the primary model that you're seeing at the moment.

Robert: The nomad office is the office where you don't necessarily come in at all unless you need to, so if you have a lot of nomads or digital nomads where they come in when they don't want to sit at home and take that zoom call sitting at their kitchen bench, or I've read some stories in especially in New York where people are taking zoom calls in their toilet because it's the only place that they have that's actually quiet, so the nomad office suites that scenario where you have smaller office space and people only come in when they have to or when they want to.

Holly: When we talk about the split between physical and virtual, in regards to headquarters, what will that actually look like?

Robert: In a lot of cases, headquarters are shrinking quite dramatically you're seeing a trend towards reducing that real estate footprint and a lot of businesses are discovering that you can start actually having people work from the office or not from the office a couple of days a week and it doesn't have any impact on productivity. There's a bit of a win-win for absolutely everyone here - employees win because they have that much more flexibility, and employers win because they're able to keep costs down. And it's not just costs of real estate, but everything that comes associated with that - you don't need as many car parks, you don't need to spend as much on electricity, it really is that win-win situation for absolutely everyone.

In a lot of cases, the virtual office is becoming a much more high-tech thing as well, so in terms of people being able to work remotely, it's not just a matter of saying ‘yeah you can work from home’ but you have to have that technology to help back that up. That's everything from HR technology to make sure that people are still being looked after and that you're discharging that duty of care all the way, up to that piece around managing that office environment so that when people do want to come in or when they do want to stay home there's a spot for them either in the office or that people know where they are.

Holly: Talk to us a little bit about how important the tech is when it comes to this and working from home/working virtually because ultimately you don't want your employees to be slacking off either - there still needs to be that sort of responsibility and stepping up to that level - so how important is the tech when it comes to working from home and virtual working?

Robert: I think tech is massively important from the beginning to the end of it -beyond not wanting people slacking off at home. I don't think that that's something that's been largely discussed - it seems that people have a great interest in being able to stay at home and they're doing the right thing for the most part. There's a lot of technology that you have to have though. You have to be able to have those video conversations for instance because you get so much more value out of a video conversation than you do out of a phone call.  You need to be able to share everything as if you were in the office - so in a lot of cases, services like Office 365, for argument's sake, where you get that massive online repository where you can keep documents and stuff like that - that's really important. The ability to make sure that you can monitor in general where people are, so you can say ‘oh well you know Joe Blog's here, he's at working from home today’ or ‘Mary over here is working in the office and she's sitting in this particular place’, those types of technologies are the ones that enable that workplace to actually function and work properly.

Holly: When we speak about, I guess, if a lot of businesses are implementing these virtual models, are we going to see heaps of empty offices right through our major cities now, because as you mentioned before the real estate if employers aren't having to pay that that hefty price for real estate, then why would they?

Robert: I don't think they are, so most companies aren't getting rid of all of their real estate, they're just downsizing slightly and what you're going to find I think is that over time a lot of the smaller companies that perhaps couldn't afford real estate in a prime inner-city location will be able to take over those places where a lot of the bigger companies have downsized and made their footprint a little bit smaller. So, I don't think it's the end of city centres for instance at the moment it's a little bit up in the air. There's a transition happening but over time I think that we'll find that city centres will still be the busy places that they used to be, but what you're going to find is that there's going to be a lot more companies working from those areas whereas in the past it really concentrated in some of the high ends particularly. But these days you're going to have a lot more diversity of companies because they can afford to come in and take over those spots that the bigger companies have downsized from.

Holly: Robert lastly before we wrap things up, I wanted to ask you which workplaces or which industries do you think will always have an office first approach?

Robert: I think you're going to find that it's the ones where you have a very specific need to have someone in the office and it makes it very difficult for them to work somewhere else. And you know you're thinking about places like manufacturing and places like that or where you've got um in some cases the interesting ones are call centres - in a lot of cases a call centre can be run remotely but there are a lot of call centre companies where they're having people come back to the office and sit in the office because you get that interaction between people and it makes it a lot easier for colleagues to help one another when they're sitting next to each other. So, it's a lot of manufacturing and a lot of knowledge where you have to have that critical mass sitting together to make sure that that the service that you're providing is actually up to standard.

Holly: Robert great to chat with you about this, such an important topic and I guess getting used to this new normal as we know it. Thank you so much take care.

Think your team could benefit from a tool that makes hot desk booking efficient and easy to use across all teams? You can start your free trial today.

CXO Robert Wilkinson Speaks to Holly from TickerTV about Hybrid Workforces and the future of office spaces in major cities. 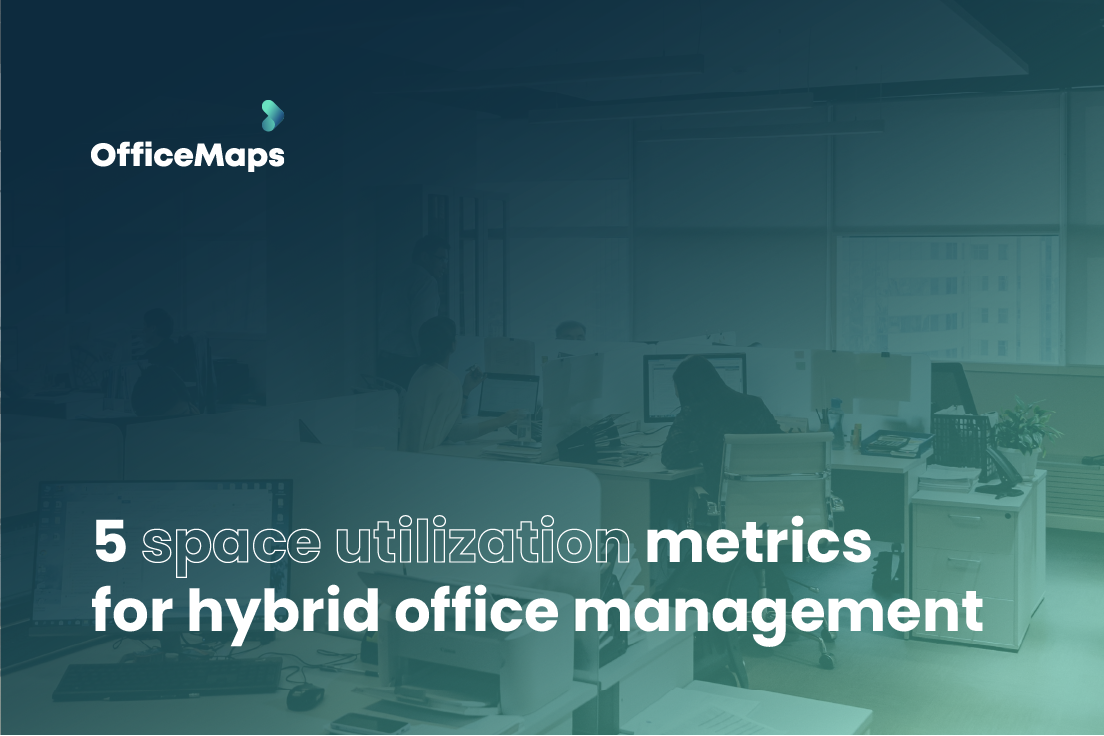 When it comes to office management, it's important to have the right metrics in place to help you make the best decisions for your business. In this article, we'll take a look at some of the most important space utilization metrics and explain how they can be used in decision making. 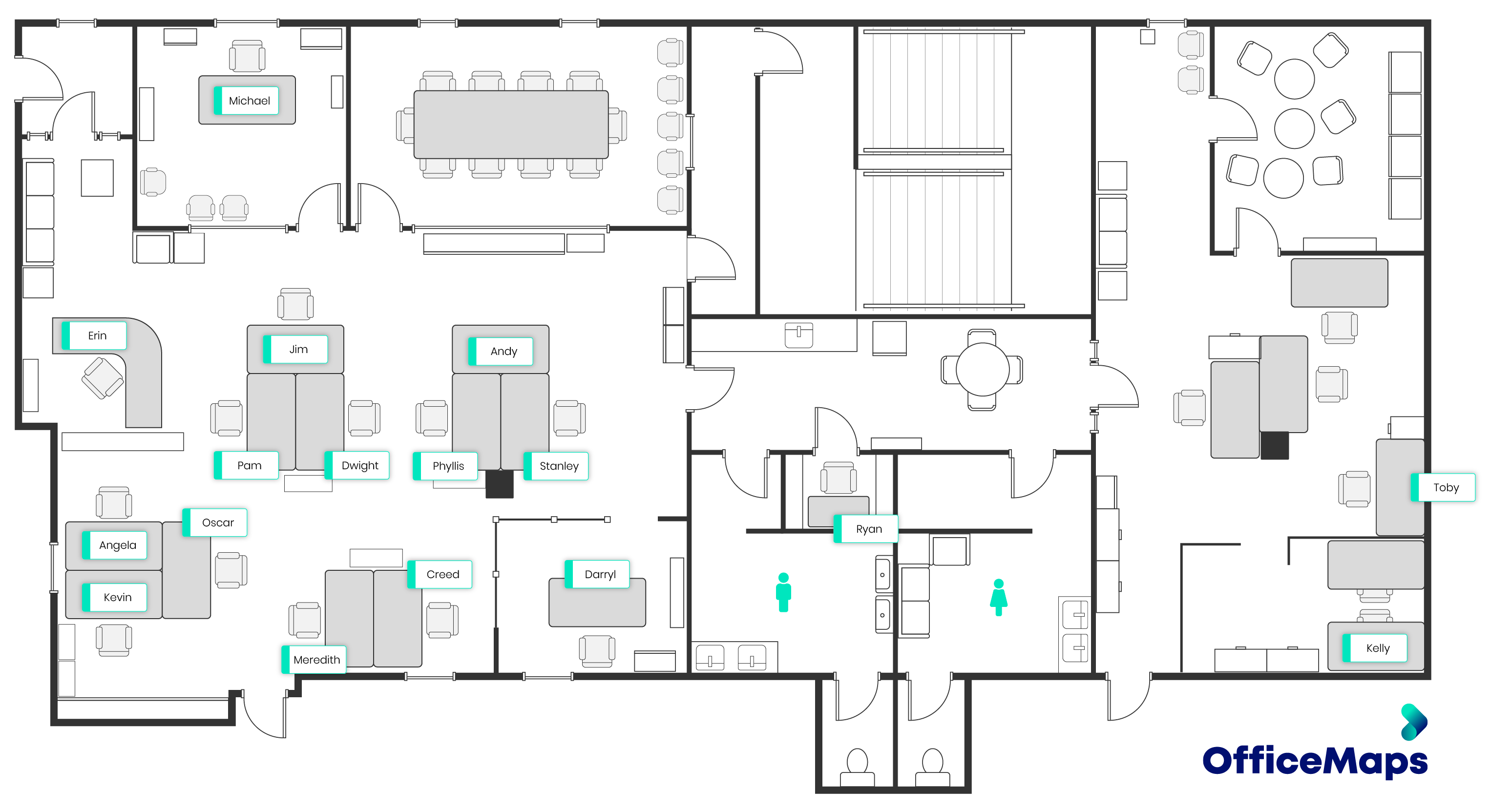 Map of The Office - Dunder Mifflin

The internet asked for it, so for a bit of fun we have delivered it. A Map of The Office from the NBC TV show of the same name.